By Jana Richtrova in 70.3, Triathlon Coaching
No comments

I know, I know – you are all waiting for my Timberman 70.3 race report, but since I have been slacking severely when it comes to blogging you have to read through one more race report, and the lead up to it since it was only 5 short weeks post IM Texas.

The race is Patriot 70.3 and it is my favorite local race that I have raced the last 3 years in a row. There is a reason it sells out quickly, and all you local triathletes should put Tuesday, October 4th on your calendars because that is when the registration for 2017 opens up. The race itself will be on June 17th, 2017, and you don’t want to miss it! It’s within driving distance from Boston, so you can even drive up on race morning, pick up your registration packet, and rack your bike just mere hours before the race. How often do you get to sleep in the comfort of your own bed the night before a race – not often.

Never having to race a shorter race post IM, this was a new territory for me.I took about 10 days off after Texas which included easy/short spinning and swimming, no running before I headed to our annual E3 Tri Team camp in Waterville Valley, NH.

I was feeling really good, my energy levels were high, and I was excited to spend a few days in the mountains with my teammates. I spent it mostly swimming and riding, and continued to stay away from running as the running legs always take the longest to recover and I was nursing a few small niggles here and there.

As you can see, I (we) had a blast. The 3rd week post Ironman it was game on again including running, and I felt pretty darn good. So good I contemplated racing Ironman Lake Placid, but stuck to the original plan (mostly because I didn’t want to spend another few 100s of $$$, and because 3 IM’s in one year may just be a one too many if you plan on going hard in all of them.

But back to the race! Before I knew it, race morning was here! I had won this race the last 3 years in a row, and since IM Texas didn’t go exactly to plan, I was putting a lot of pressure on myself to perform well! I didn’t care if I was first or last, I just wanted to put together a race I could feel really good about. Race that reflected all the hard work that I had been putting in throughout the winter.

This is a unique swim for me as this race does have an open/elite wave anyone can sign up for and those who do (male/female) go of in the very first wave that’s usually only around 20 people deep. As a weaker swimmer in a male dominated wave, I had always end up swimming completely by myself the entire time which I actually do NOT enjoy so my goal this time was to stay on feet and not get dropped right away. I am happy to report, I didn’t get dropped, and even found a friend to swim with for at least half the swim! We were swimming right along until we caught a couple of guys, and I decided to jump drafts, which proofed to be a big mistake as I lost my original swim buddy, and ended going around my new friend. Ugh! I spent the rest of the swim chasing feet up ahead and for the first time ever, I did catch them. YES! Overall, I didn’t get lost, swam straight and although I ran out of gas somewhere ¾ way through the swim, I felt really good about most of my swim! The time is still nothing to brag about but I was a lot closer to my competition than I have been before so that’s a win in my book! I know I’ll never win a race with my swim, but I sure do know I can lose it, so I have been and will continue to do what I can to bridge the gap.

I am proud to say I swam straight and didn’t go on an of course expedition this time! My vision was super clear thanks to my faverite BlueSeventy Nero Race goggles! I suppose I need to work on my dolphin diving but at least I was super comfy in my BlueSeventy Helix!

This race has some of the longest transitions, but wearing #1 at least guarantees some prime T1 real estate! I am still not the best at taking my wetsuit off even though I practice it almost every time I swim open water in practice, but I did my best to get out of there fast. That timing chip gets me every time.

The Bike: 2:22:19 (Fastest female bike split, and 8th Overall fastest including the guys)

I really wanted a strong ride after my poor performance in terms of “watts” I generated in Texas, and so I brought out my new weapon of choice – “Mr. Flash”. Thank you Quintana Roo! QuintanaRoo is my new sponsor for 2016 and beyond and I couldn’t be more excited for what is to come.

Flash and I have only spent 2 or 3 short taper rides together so going out for a 56 mile race effort was definitely a bit of a gamble, but one I would take again. One can say we started our relationship on the right foot!

Just like the swim, this race is unique because when racing of the front, it offers mostly wide open roads, which I love! (No crowds, and I barely have to scream “on your left”). It is a 2 loop bike course. I had a strong first loop, but the wheels started to fall off on the 2nd. Very uncharacteristically my legs were on fire, and I was now dealing with what the pro women must deal with when getting caught by AG men. I watched 3 men go by me in a paceline. I dropped back but before I knew it I started to catch up to them. I surged to make my pass and within seconds they were passing me back -ugh! So much for dropping back the legal distance before re-passing. This went on for a while before I just didn’t have anymore matches to burn to pass and so I let them get away far enough so I could get back into my rhythm. I just didn’t have the energy or patience to deal. This course offers ample riding space and there is no need for packs to form!

Even though my legs were killing me, and my power dropped on the 2nd loop which I wasn’t happy about, I am ok with it now because now I know why! Slight technical difficulties as somehow somewhere my saddle slipped! No wonder my legs were on fire! I normally ride with ZERO tilt! I continued to stay aero, and rolled into T2 ready to run but definitely doubting my legs before I even started.

T2: 2:20
Another long run through transition.

That was rough. My HR was high, but my pace was way too slow.

I tried keeping the effort up, but the pace didn’t budge. My legs hurt and I was just mad that I was shuffling (again). I tried to keep moving so at least my lead biker didn’t fall of her bike but it was tough. I don’t really have any details to report, besides the fact that I was just very happy to see the finish line, and this could have just been 26.2 – that’s how rough I felt, and I was mad at myself the entire time that I couldn’t find my running legs!

I was happy I defended my title for the 4th year in a row, but definitely a bit disappointed in my individual performance. Knowing what I have done on this course, and knowing my fitness, I know I can go sub 4:30, and so I will be back! 5th time the charm? 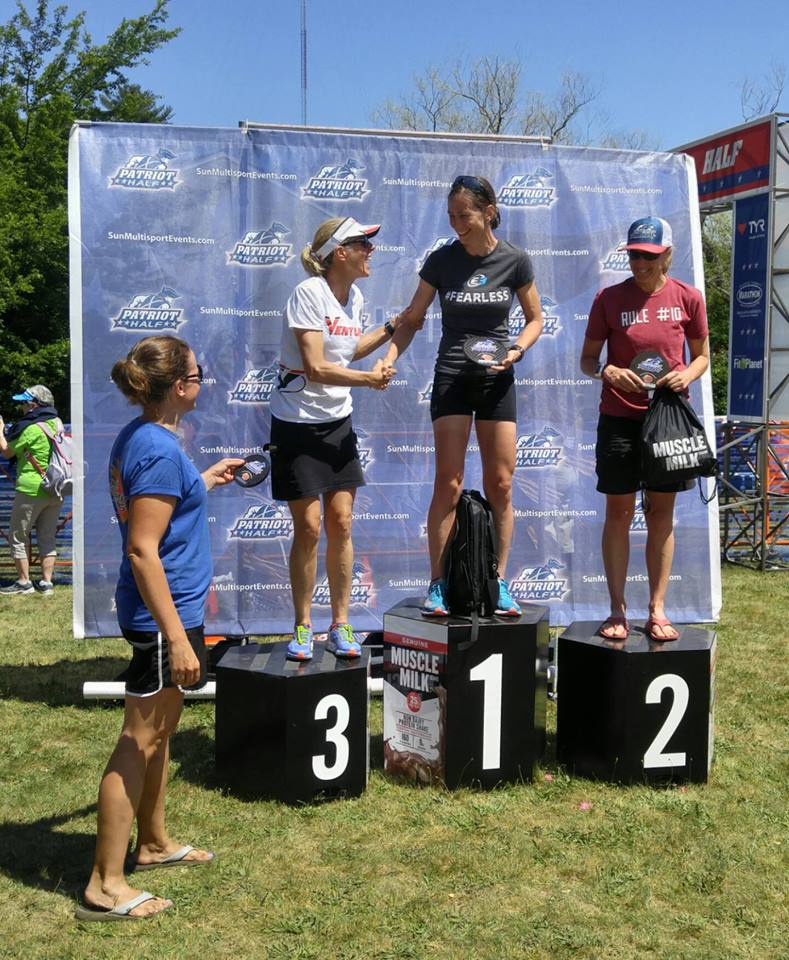 Lisbeth Kenyon, Becky Paige and I at the finish line area! These women can swim/bike and run!
And finally my speedy E3 Teammates all of whom topped the podiums! YES! 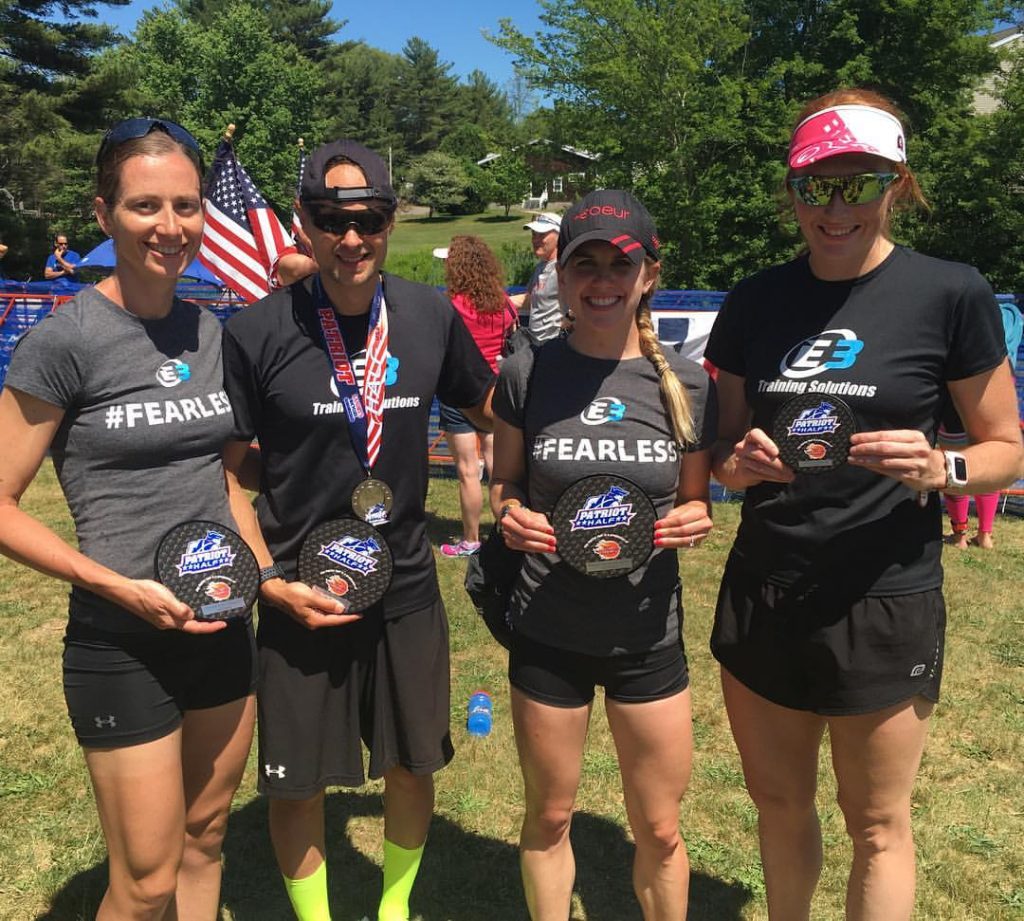 So remember to mark those calendars so you don’t get left out, and I hope to see you all there next June!

As always, THANK YOU to my coach Jorge Martinez of E3 coaching for putting up with me when all I did was complain how unfit I may be post Texas, and to my individual sponsors: Quintana Roo – we sure started our relationship on the right foot with one fast bike split; CycleOps without whose trainers I would have put in close to zero outdoor miles, and Dr. Cool whose products keep my body temp down even my effort level is high. And to E3 Training team sponsors – you guys ROCK, and I appreciate the support more than you know. You not only make me look good, but also feel good while going fast!